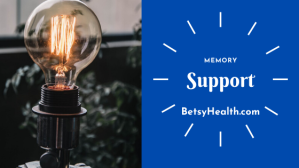 The good news is, we are living longer. Along with longer lives, however, more of us will experience declines in cognitive function. The good news is many nutrients show promise in helping us retain our cognitive abilities. Here are some of the latest findings.

Earlier studies found the body quickly absorbs and retains collagen hydrolysates in circulation, and that the nutrient helped speed recovery from brain injury by promoting new blood vessels in the brain.

In this study, 30 healthy men and women, aged 49 to 63, took 5,000 mg of collagen hydrolysates per day. There was no placebo group. After four weeks, an MRI revealed increases in brain nerve-synapse activity, indicating improvements in brain structure.

Participants also improved in recalling words from a memorized list, and orally pairing one word with its mate from a list of memorized pairs read aloud by the researchers. Doctors also saw a link between increases in brain nerve-synapse activity and improvements in the word memory tests. The high absorbability of the small proteins in collagen hydrolysate may be responsible for these brain benefits.

In this study 40 people, aged 50 to 90 who complained of mild memory loss, took 90 mg of an easily absorbable form of curcumin twice per day, or a placebo. After 18 months, while the placebo group had not changed, those taking curcumin improved by 28 percent on memory tests, and mood improved slightly.

In one of the most important findings for curcumin, compared to the start of the study, scans of the brain areas that control memory and emotion revealed fewer nerve-cell impairments—known as amyloid plaques and tau tangles—both of which are factors in Alzheimer’s disease.

Doctors in this study included 215 healthy men and women, aged 60 to 70, with mild to advanced cognitive decline, excluding others with powerful recall abilities, those who consumed lots of polyphenols from fruits, tea, and dark chocolate, and those taking omega-3 supplements, all of which might improve memory. Participants took a placebo or 300 mg of polyphenol extract from grapes and blueberries, per day.

After six months, those taking polyphenols had improved their ability to recall random items from a list. Looking at participants with the most advanced cognitive decline, those in the polyphenol group were better able to recall the times, places, and emotions associated with events they had experienced.

Memory naturally declines with age. In this study, 90 men and women, aged 58 to 60, with age-related memory impairment took a placebo, or 600 mg or 900 mg of spearmint extract containing 24 percent total polyphenols.

After 90 days, compared to placebo, those taking the 900 mg dose of spearmint saw a 15 percent improvement in working memory—the ability to remember and evaluate information in order to make decisions or reach conclusions. Participants also saw a 9 percent improvement in spatial memory—the ability to remember one’s location or environment, a sort of cognitive map. The 900 mg group also reported better mood, ease of getting to sleep, and better alertness on waking.

Discussing the findings, doctors said they believe it is the antioxidant content of spearmint that may reduce cell damage in the hippocampus, the area of the brain responsible for memory.

BetsyHealth Note: This article is for educational purposes only. It is not intended to diagnose, treat, prevent or cure any disease. Consult your healthcare provider before taking a supplement, especially if you take prescription or over-the-counter medication or have a medical condition. For example, many supplements, such as curcumin, thin blood.

Article copyright 2020 by Natural Insights for Well Being. All rights reserved. Used with permission.