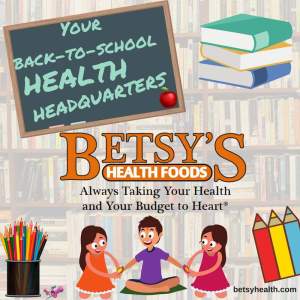 In the hustle and bustle of preparing for the upcoming school year, don’t forget the most important element to a great academic season, which is the upmost health for your student, whether that student is your kindergartner on her first day of school or you first-time college student, even if that college student is you!

At Betsy’s, we have a variety of products to support the health concerns that help make a school year run smoothly, from brain and digestive health to immune and stress support. In these studies, researchers considered omega-3s for kids, prebiotics and antioxidants for weight management and nutrients that may help in constipation.

Childhood asthma in the United States is increasing and at historically high levels. Doctors believe one factor is low levels of omega-3s in the Western diets consumed by mothers during pregnancy. In this study, 663 women in the 24th week of pregnancy began taking 2,400 mg of omega-3 fish oil per day, or a placebo, through birth.

In this reading study, 122 children, ages 9 to 10, took a placebo or 558 mg EPA plus 174 mg DHA and 60 mg GLA per day. After three months, kids taking the omega-3/6 had better reading skills compared to placebo. Doctors saw the greatest benefit when kids had to read a nonsense work aloud, pronouncing it correctly; and to quickly read aloud a series of letters. Children with mild attention problems who took omega-3/6 showed the most improvement. The brain largely relies on omega-3s for nerve cell communication, doctors said.

Prebiotics are non-digestible fiber that promote good bacteria in the gut, unlike probiotics, which introduce new bacteria into the system. In this study, doctors gave 42 overweight or obese children, age 7 to 12, a daily dose of the prebiotic oligofructose-enriched inulin, or a placebo.

The kids on inulin saw an increase in bifidobacterium, a beneficial probiotic, and lower levels of a bacteria linked to obesity. The inulin group also had 15 percent lower levels of a sign of inflammation (interleukin-6), and a 19 percent decrease in triglyceride levels. Doctors said the findings suggest the placebo group would gain 18 pounds annually compared to a more normal seven pounds for prebiotics.

Fat that lies just below the skin, particularly around the abdomen, is hard to shed. In this study, 17 obese boys and girls, average age 10, took a placebo or a carotenoid combination of beta-carotene, alpha-carotene, lutein, zeaxanthin, lycopene, astaxanthin, and gamma tocopherol. After six months, kids in the carotenoid group saw 4 percent less of this type of fat tissue while the placebo group had increased 4.2 percent. Waist size also decreased 3 percent for the carotenoid group and body mass index scores improved significantly. Doctors said beta-carotene may help regulate fat tissue in children with obesity.

Children can become constipated with a change in diet, by consuming too little water, or not getting enough fiber in the diet, among other reasons. Eating more fiber-rich fruits and vegetables, and drinking more fluids can relieve the condition.

After six weeks, while there was no change for placebo, kids who had taken inulin had improved towards normal stool consistency and relief from constipation.

Inulin is a natural plant-based soluble dietary fiber, slightly sweet in taste, and is called a “prebiotic” because it promotes the growth of beneficial bacteria in the gut called “probiotics.”

Children have bodies that are still developing, which means extra caution is important when choosing supplements for growing bodies. Unless under strict directions from your doctor, best practice is to stick with products that are strictly labeled for children in the age group that fits and that come from manufacturers you can trust. In other words, what might be safe for you as the parent might not be safe for your child, even in smaller doses.

At Betsy’s, we love helping you help your family meet its health goals. We look forward to another school year, our 25th this 2018, when we can be always taking your health and your budget to heart.®

Article Copyright 2018 by Natural Insights for Well Being. All rights reserved. Used with permission.

Betsy’s Note: This article is for educational purposes only. It is not intended to diagnose, treat, prevent or cure any disease. Consult your healthcare provider before trying a supplement, especially if you take medications or OTC drugs or have a medical condition. For example, omegas and carotenoids thin blood.