Studies in the lab using smaller mammals or test tubes can be the precursor to further studies on human subjects. In these examples, good results in the lab may lead to larger, human trials. Here are some of the most promising recent findings:

Curcumin and ALA boost DHA

The omega-3 DHA is essential for healthy brain function, and earlier studies showed curcumin helps preserve DHA after brain trauma. In the lab, curcumin stimulated DHA production through its precursor, alpha-linolenic acid (ALA). Also, rats that took curcumin with ALA had increased brain DHA and showed less anxious behavior.

The mitochondria are the energy factories of the cell. In the lab, researchers showed that in early-stage diabetes elevated blood sugar levels damage the mitochondria in the smallest blood vessels and arteries, reducing circulation. Doctors introduced resveratrol into the cells and found resveratrol protected against mitochondrial damage, suggesting resveratrol may delay or prevent cardiovascular impairments and normalize mitochondrial function.

In the lab, mouse cells deficient in zinc showed an inflammatory response and, for the first time, doctors were able to demonstrate that low zinc levels caused abnormal immune-cell inflammatory activity, and changed the behavior of inflammatory proteins. Also, compared to younger subjects, older mice had lower zinc levels that were linked to inflammation. 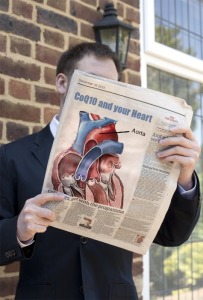 Children born with low weight who grow quickly are more likely to have heart disease later. Doctors think this is due to low levels of CoQ10. In this study, low-birth-weight rats that grew quickly had faster-aging aorta cells than those of healthy-weight. After taking extra CoQ10, cell aging and aorta damage decreased.

Seaweed contains anti-inflammatory molecules called fucoidan. In the lab, researchers gave mice a low and high dose of fucoidan, or a placebo. After 21 days, compared to placebo, grip strength and endurance swimming times increased as fucoidan doses increased, signs of fatigue were about 20 percent lower, and lipid profiles, liver, and kidney functions all improved. Doctors said the results suggest fucoidan can reduce fatigue, and may have antioxidant and lipid benefits as well.

Betsy’s Note: The supplements in this article may also thin blood. This article is for educational purposes only and is not intended to diagnose, treat, cure or prevent any disease. It is always a good idea to consult a healthcare provider before beginning a supplement, especially if you take medication or have a medical condition.

Article copyright 2015 by Natural Insights for Well Being.  All rights reserved.