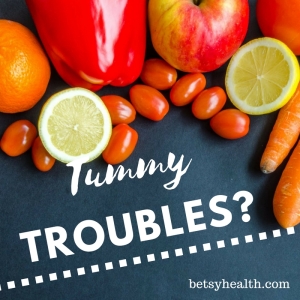 Bloating, gas, constipation diarrhea.  These digestive and gut-health issues are not the easiest things to discuss and are even more uncomfortable to experience.  Yet, according to the National Institutes of Health, about one in five Americans suffers from digestive diseases, including GERD- style heartburn (65 million prescriptions per year), constipation (63 million cases), Irritable Bowel Syndrome (15 million cases) and Crohn’s Disease (1.8 million prescriptions).

But, you don’t have to be in a disease state to experience digestion woes. Many of us are sensitive to foods that are so common in the American diet, the thought of eliminating them can in itself cause indigestion. Corn, dairy, wheat and soy are common allergens in the diet, even when these foods have not been genetically-modified in some way. Food additives, including chemically-based artificial sweeteners, can account for many digestive issues in some people. Genetically-modified foods in and of themselves are proving triggers for digestive issues in a wide range of sufferers.

GLUTEN and OTHER TRIGGERS

How many of us knows someone whose life has been radically improved by eating a gluten-free diet?  And that’s not even considering those who are diagnosed with celiac disease, for whom consuming gluten can lead to a range of uncomfortable complications. If you think you may have a gluten issue, the latest recommendation from the American Medical Association, as of August 2017, is to get screened for celiac disease since doctors cannot distinguish the disease from the lesser sensitivity because symptoms are similar. Also, once you start a gluten-free diet, testing for celiac disease is no longer accurate.

Heartburn is another digestive- health issue that can be ameliorated by eliminating certain triggers. Gravity is a primary cause—so don’t lie down after a meal! Other common triggers include fried foods, spicy foods, chocolate, carbonated beverages, alcohol and coffee. Did you know that as we age, our stomach acid decreases, which can actually cause heartburn? For some, increasing betaine hydrochloride levels makes a difference in heartburn, as well as providing digestive enzyme support for meals.

But simply doing away with offending foods and actions may not alleviate all symptoms of common gastrointestinal issues. In those cases, supplements can stimulate healing from within.

This is the first placebo-controlled trial to test the effects of resveratrol on oxidative stress levels in ulcerative colitis (UC), an inflammatory condition of ulcers or sores in the lining of the large intestine. While doctors don’t know the cause, they believe oxidative stress plays a role.

In this study, 56 people with active mild to moderate UC took a placebo or 500 mg of resveratrol per day. After six weeks, levels of the important antioxidant, superoxide dismutase (SOD), had decreased for placebo while increasing for resveratrol. Total antioxidant capacity and signs of oxidative stress deteriorated in the placebo group but improved for resveratrol.

While there were no improvements for placebo, measurements of disease activity decreased and quality of life test scores improved for those taking resveratrol. Doctors concluded resveratrol can reduce oxidative stress in those with ulcerative colitis, and improve quality of life.  Reference: Archives of Medical Research; 2016, Vol. 47, No. 4, 304-9

IBS affects as many as 15 percent of people worldwide. Symptoms include abdominal discomfort, bloating, constipation, diarrhea and gas. One of the better symptom-relieving supplements is peppermint oil. Its primary active ingredient is menthol, which makes up 35 to 50 percent of peppermint oil. A meta-analysis of 121 studies for IBS found peppermint oil was more effective than antispasmodic drugs, antidepressant drugs and fiber. Look for higher levels of menthol in your peppermint supplement.

The power of probiotics

Probiotics are known to support healthy digestion. That’s because the intestines contain trillions of bacterial cells, not all of which are friendly, and inserting a few billion of the good guys promotes a healthier environment. It also benefits immune health, because the intestines house about 70 percent of the body’s innate immune function.

By stabilizing the gut, probiotics can ameliorate IBS symptoms, such as bloating, cramping, gas, diarrhea and constipation. In a 10-week 2016 study of 50 patients, a probiotic mixture of seven probiotic strains relieved overall IBS symptoms and improved stool consistency.

The trick with probiotic supplements is that species and strains matter. If you’re looking to maintain general good gut health, you might opt for a multistrain formulation that also includes a prebiotic such as inulin or fructooligosaccharide (FOS) to feed the probiotics. But if you want help with a specific digestive-health issue, not just any acidophilus will do. As new research emerges, supplement makers are matching specific probiotic strains with specific health end points, but we’re not quite there yet. In the meantime, research your probiotic supplement wisely and well.

Waste moves through the digestive tract at the rate of muscular contractions in the large intestine. When these contractions are slow—a condition called slow transit—waste can accumulate, causing constipation. In this study, 100 people with slow transit took a prebiotic and a probiotic, together called “synbiotics,” twice daily, or a placebo.

The synbiotic group had begun to improve by week four. After 12 weeks, 45.8 percent of those taking synbiotics had normalized transit times compared to 16.7 percent for placebo, and 64.6 percent of those in the synbiotic group showed clinical improvement compared to 29.2 percent for placebo, including increased stool frequency and consistency, decreased transit time, and fewer constipation symptoms. Reference: Nutrients; 2016, Vol. 8, No. 10, 605

Digestive issues needn’t be a way of life. Attention to diet and lifestyle triggers, as well as nutritional supplement support where warranted, can make a world of difference when it comes to digestive discomfort. Remember to check with your doctor about your digestive symptoms to ensure what you are experiencing is not a disease that may require medical intervention.

Article copyright 2018 by Delicious Living and Natural Insights for Well Being. All rights reserved. Used with permission.

Betsy’s Note:  This article is for educational purposes only. It is not intended to diagnose, treat, prevent or cure any disease or condition. Consult your healthcare provider before taking a supplement, especially if you take prescription or over-the-counter medications or have a medical condition to avoid contraindications. For example, resveratrol may have phytoestrogen properties and also thins blood.  Peppermint oil and certain probiotic products may also thin blood.